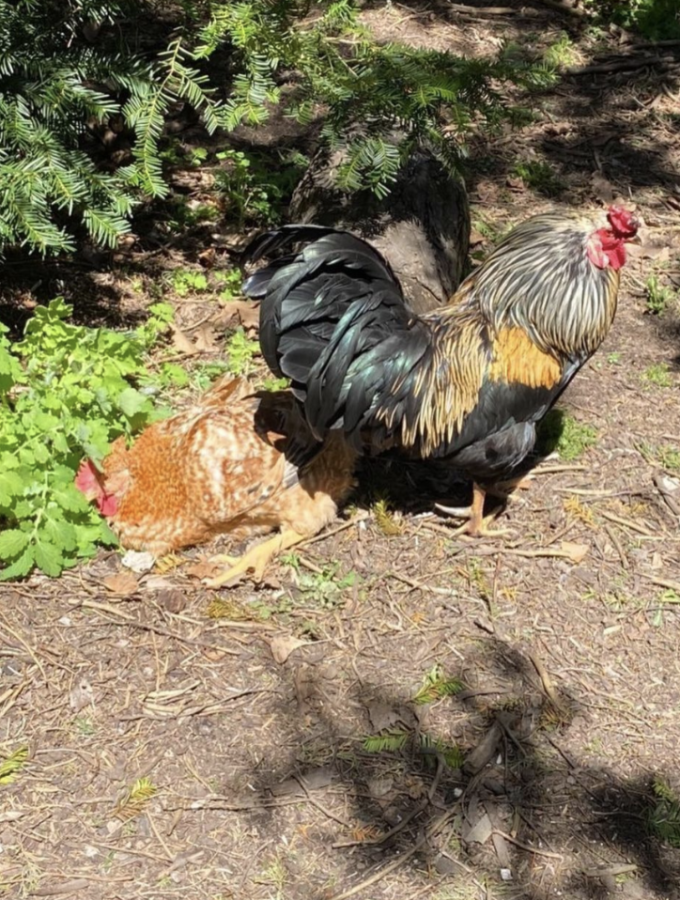 “A new friend has appeared, I’ve been getting to know her over the last couple days… will keep you all updated.” — The Rooster.

Jackson’s Gardens are a wonderful home for a variety of migratory bird species and ravenous, deranged squirrels. Recently, however, a new guest has made his way into the gardens: The Campus Rooster.

If you haven’t heard of him, you must be living under a rock; The Rooster has captured the hearts of the campus community. Many students flock to the gardens to see The Rooster for themselves. He even has his own Instagram account: @jacksongardenrooster. It’s as if this is the first time these young adults have seen a rooster before, but I do admit, he’s a marvelous sight with his iridescent greens and blues, and fiery orange feathers.

Personally, like many others, I adore The Rooster. He doesn’t know it, but he’s my new best friend, begrudgingly allowing me to sit next to him at times, when he is in the mood to tolerate my excessive adoration. While roosters are known to be territorial and occasionally even aggressive, The Rooster is a sweet and gentle boy. If you respect his space, he will come to you in curiosity. If you offer him seeds or a little bit of your lunch (don’t give him too much!), he’ll gently take the food right out of your hand. What a darling!

But there’s more to this story besides our single rooster. On Springfest, my friends and I decided to eat in the gardens, and sought out The Rooster to accompany us. When we found him, we were overcome with shock and awe- there was another chicken! She was laying down, and appeared mildly injured and dehydrated. As a kind person would, our brave and benevolent Rooster never left her side. We gave her a small bowl of water, and fortunately, she perked up after having a hearty drink. Due to her condition, however, we needed a plan. I contacted my professor, Kathleen LoGiudice, and told her of the situation. We had already told her about The Rooster, and she contacted a local farm animal rescue. Bird flu is rampant right now, and we wanted to make sure our beloved companion stayed healthy.

Disappointingly, the farm rescue was little help. They were successful in taking the injured chicken, but completely and hilariously failed to attain The Rooster. It must have been fate; The Rooster was clearly far too powerful for any mere human to handle. I must say, they really gave it their worst effort. It might not be a fan of it, but you can simply pick up a rooster with your hands. You’ll probably get pecked, and as I know all too well as someone who works with birds, getting pecked hurts, but you’ll live. It seemed that the threat of a pecking was too much of a concern for the animal “rescuers,” and The Rooster evaded their paltry attempts at a rescue. While I am concerned for The Rooster’s well-being, deep down (actually…not that deep down), I was elated that our little buddy got to stick around.

Every morning as I walk past the gardens, I hear The Rooster scream his roosterly call, saying to the world and anyone who will hear him: “BEHOLD! I AM A ROOSTER! HEAR MY CALL AND REVEL IN MY POWER!” And every time I hear him, it brings a smile to my face. I’ll be graduating in June, and while I’m ready to explore the world past the gates of Union, I know I’ll miss that charming little rooster dearly.