May Day in Berlin 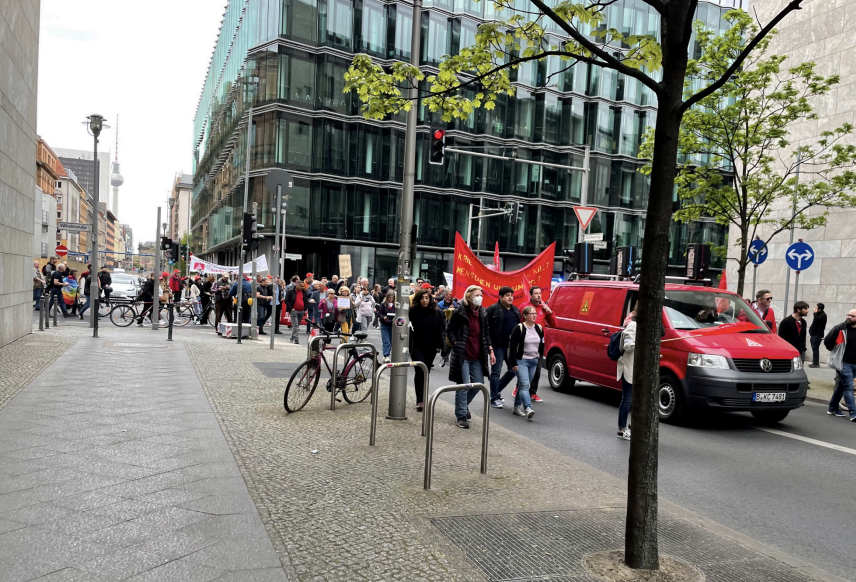 Labor organizers associated with the German labor union confederation march with banners and signs in the heart of Berlin, near the federal parliament on May Day.

I decided that I wanted to go to May Day in Berlin. May Day parades take place every May 1 and are explicitly to represent socialist and leftist movements on the streets of Berlin. Berlin has a long history of May Day parades, for more than a hundred years. I thought it might be interesting to see what it was all about.

In the United States, the idea of May Day is mostly a novelty. We have Labor Day in the U.S., which has its own long and significant history. But even on Labor Day, I have not seen the level of organization and mass mobilization that I saw on May Day in Berlin. May Day in Berlin meant both the sensationalized marches through historical working class neighborhoods that often result in clashes with police, but also organized marches of parliamentary political parties, trade unions and international groups. These international groups are mostly groups who have nationals in Germany, like left-Kemalists from Turkey or Greek Communists. The defining characteristic of these marches is their size. They will stretch for blocks around Berlin’s downtown. And they are (or at least the march I attended was) extremely civil. The route is determined ahead of time and police guard the route. The black bloc protesters who are stereotypically associated with socialist marches were absent, although there were other protests that day.

Why do they march? It’s unlikely that anyone in that crowd believed that a new wave of social legislation would be passed in the wake of May Day. Perhaps the most important of the social issues was Germany’s recent large increase to the military budget, which is believed to be anathema to continued growth of Germany’s social safety net. But really the marches carry on because it shows a tangible, boots-on-the-ground interest in the maintenance of the most progressive elements of Germany. It is an economic or social version of the idea in the United States that if you don’t exercise your rights, you will lose them.

And that level of mobilization is important in advocacy for social issues. From unionization, to debt relief, which are poignant issues at American Universities, to the successes of Germany’s social safety net. If you are unsure of whether it is possible to affect social change in your local region, take up the example of the international movements and see how they put their boots on the ground to advocate for the issues they care about.