Add Kirby and the Forgotten World to the switch at Reamer 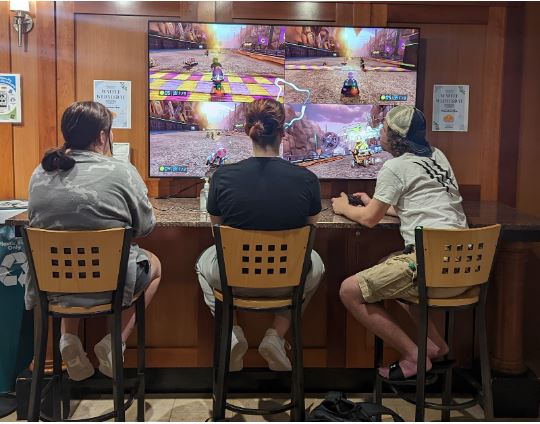 Anna Chapdelaine '25, Genevieve Oakes '25, and Daniel Casper '25 playing Mario Kart on the Nintendo Switch at Reamer Campus Center. The table next to the Reamer Bookstore has installed a Nintendo Playstation just beginning this year.

Kirby and the Forgotten World is an amazing video game that was added to the Nintendo Switch this year, and everyone who has enjoyed previous Kirby games should try it. What are my credentials to make such a bold statement, you ask? I have been playing Kirby games since I was three years old when I first got my Game Boy Advance SP. However, Kirby has been around for much longer than my lifetime. In fact, this year marks the 30th anniversary of Kirby’s debut. The new Kirby game, Kirby and the Forgotten World is wonderful, especially in co-op, which would make it well suited to be added to the Nintendo Switch at Reamer Campus Center.

The new Kirby video game from Nintendo, Kirby and the Forgotten World, first went on the shelves in March of this year. I have been looking forward to an updated Kirby game since 2018, the year that I first got my Nintendo Switch and played through all of Kirby: Star Allies. While the aforementioned game was nice, and technically in 3-D, it was still confined to 2-dimensional directional movement. This is part of the reason that Forgotten World was such an exciting game because this will be marked as the first 3-D video game in the Kirby series that actually includes 3-dimensional directional movement. Throughout my first playthrough, I’ve been very impressed so far with the graphics.

Kirby and the Forgotten World also have different difficulty settings, which makes it easy to customize the game to your specific skill level. It has a “Spring Breeze” mode, an easier way to play the game, as well as a “Wild” mode, which makes the boss fights more difficult. Having two options of difficulty to play the game makes Kirby accessible for all different types of players, regardless of your level of gaming experience.

Another notable feature of this game is the co-op option. In the game, you are granted access to this feature very early on. The two-player option is a great feature to have for something like the Nintendo Switch at Reamer Campus Center, so friends are able to play the game together. While other games available at Reamer are multiplayer, especially Super Smash Bros (fighting games) or Super Mario (racing games), they are not cooperative.

Each level in Forgotten World is entertaining and challenging, with new tasks for you to complete. There are also a plethora of side games to play in addition to the main quest. Overall means that there is a ton of content to play through, which would make it a great game to be open for college students to play as they come and go. Each level is self-contained and fun even without the context of the entire story, so there would be no need to make a new save file for each person who sat down to play.

In conclusion, Kirby and the Forgotten World is a fun game that can be made accessible to everyone. The graphics and 3-D motion make it not only easy to navigate but pretty to look at. The video game has a fantastic co-op option, and because of this, it should definitely be added to the games on the Switch at Reamer Campus Center.