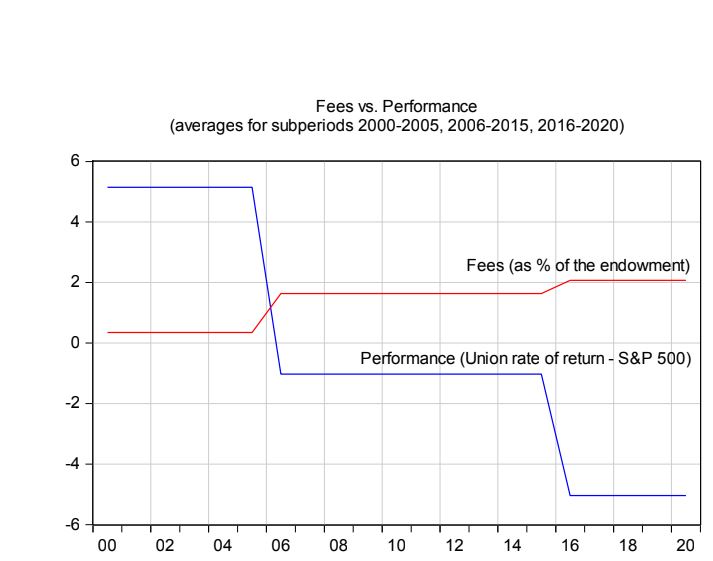 On May 2, 2022, Professor Eshragh Motahar of the Economics department met with me, along with some other students, to discuss the endowment. He outlined the topics he researched in his presentation from April 28, 2021: “Union College Endowment: An Analysis of Fees, Returns, and Related Matters.” I was told that essentially, Union’s endowment has been performing increasingly worse over the past 20 years, while the college spends more and more money on managing the endowment each year.

Professor Motahar’s research, which includes data from the past 20 years, keeps track of how Union College’s ~$600 million endowment is performing. The endowment is made up of stocks, bonds, and donations to the school. The Board of Trustees is in charge of this endowment, and a group of investment managers manage the endowment. Every year, around 5 to 6 percent of the endowment is spent on expenses for the college, in addition to tuition paid by students. These expenses include workers’ salaries, maintenance fees, benefits, and other expenses. These numbers have been confirmed by Scott Jones, the Vice President of Administration and Finance at Union.

In 2021, Professor Motahar told Concordiensis’ Emeritus Editor in Chief, Akriti Dhasmana, that he began investigating Union’s endowment performance after “a Union alumnus who now works in the Finance sector in NYC pointed out to him that Union’s endowment is poorly managed on a structural basis.” He attempted to contact Diane Blake, the Vice President for Finance at Union College at the time, but received no response. He told the Concordiensis that he then began “examining Union’s annual Financial Statements covering 15 years and its IRS-990 tax returns covering 11 years.”

The attached graph shows that the endowment has been performing below the S+P 500 since 2007, and has steadily gotten worse over time. Meanwhile, fees have been staggeringly high, with FY ‘20 listing its investment management fees to be $14.6 million. This is 38% higher than the fees for FY ‘19, just one year prior. Investment management fees are the price of having money managed professionally. Professor Motahar was not given an evidence-based explanation from the administration as to why the endowment was performing so badly while investment management fees were rising so quickly. Scott Jones explained to me that these statistics are not monitored by the school officially.

Professor Motahar also explained that for FY ‘21 (fiscal year 2021), Union’s endowment performance was 12 points below the S+P 500. He described this rating to be “quite dismal.” Not only did the endowment performance drop, but the investment management fees for FY ‘21 were not made public. Professor Motahar said this was the first time the college has abstained from publishing the fees in over two decades.

Professor Motahar explained that New York State has laws upholding fiduciary responsibility, which basically requires the Board of Trustees to manage the endowment responsibly. These laws are vaguely defined in New York State, and there are no specific laws that require full transparency of the decisions made by the Board of Trustees, even as the endowment performance inexplicably decreases, and the fees continue to increase. However, refusing to make this data public both hinders Professor Motahar’s ability to conduct research, and withholds information that directly financially affects students and staff at Union.