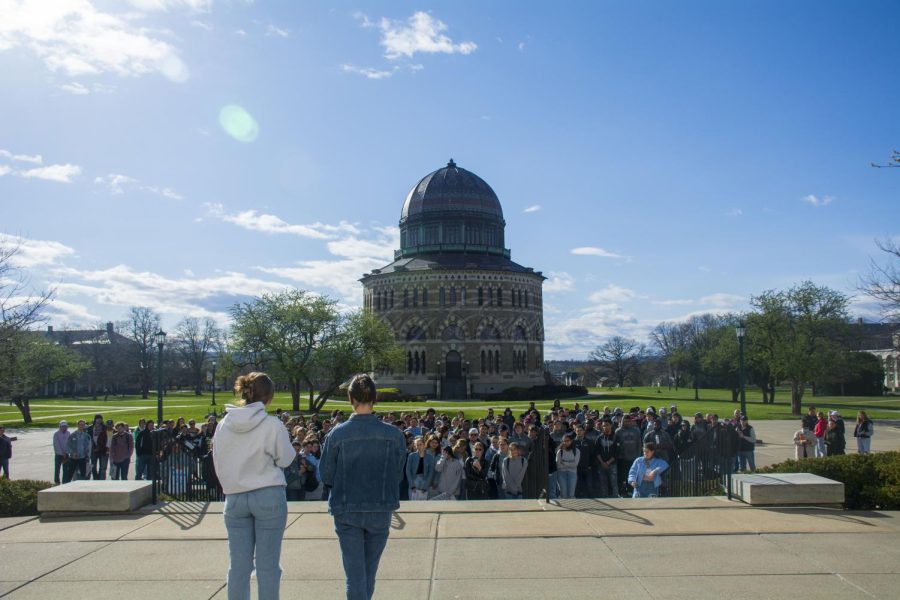 Hundreds of students, faculty, and staff gathered in front of Library Plaza to march for the 2022 Denim Day Movement. Women’s Union leaders Jackson Giammattei '23 and Emily Olenik '23 explain the difference behind denim to the attendees before starting the march around Nott Memorial.

On Wednesday, April 27, Women’s Union held a march from Library Plaza in honor of Denim Day, in which over a hundred attendees went from the plaza around the Nott Memorial and back.

The event started with speeches from Women’s U leaders Jackson Giammattei ’23 and Emily Olenik ’23 on Denim Day’s history, and Amanda Tommell-Sandy, the Wicker Wellness Center Assistant Director for Health Promotion. Both speeches emphasized the need for those in the Union community to prevent sexual assault on campus, as well as to support those who have experienced it. Attendees wore jeans, held handmade signs, and wore teal ribbons pins passed out by the Women’s Union.

Denim Day, which takes place on the first Wednesday of Sexual Assault Awareness Month (SAAM) in April, is held to educate people on sexual assault, with a historical focus on victim-blaming. The day is named for a high-profile 1992 case in Italy, in which an 18-year-old girl came forward after being raped by her driving instructor, who threatened to kill her if she told anyone. The Italian Supreme Court ruled on the case seven years later, convicting the rapist of a lesser indecent exposure charge, stating that “it is a fact of common experience that it is nearly impossible to slip off tight jeans even partly without the active collaboration of the person who is wearing them.” The day after the decision, women members of the Italian Parliament wore jeans in protest and held signs reading “JEANS”, “ALIBI” and “PER STUPRO” (“jeans: alibi for rape”). The Court overturned the ruling in 2008 and such a defense no longer applies to rape charges. The first Denim Day was organized in Los Angeles by Patricia Giggans and now involves millions of people in events worldwide.

Women’s Union leadership spoke about sexual assault prevention and awareness on campus when interviewed. Ayah Osman ’24 believes in having more than one employee in the Title IX office, as well as for more funds to be allocated to the office, “so that cases get looked at quicker.”

Giamattei praised the support of Union administrators and their attendance at events like Denim Day. She said, “when we do events like this, they’re very willing to support us in any way that they can.” Olenik praised student attendance at the event, stating that it showed “these are issues that people are willing to talk about.”

The event also brought out many who in interviews cited solidarity and safety on campus as reasons for attending. Haley Gatley ’25 felt “very passionate about spreading awareness of issues, especially sexual assault, on campuses.” Dionis Polcano ’24 said, “I don’t want people like my mother to feel targeted for what they wear.”

Attendees interviewed also highlighted the role of men in preventing sexual assault. Trevor Adams ’24 thought men could actively “seek out” and play “a role to make sure that their friends are okay at all times, reaching out to make sure that everyone’s okay. If they see a situation where other people are not comfortable, maybe step in or […] tell someone in charge.”

Harper Lyon ’22 thought it was “really important for men to be visibly supportive of awareness of all these issues, especially sexual assault victims support.”

Josh Hauge, Union Head Men’s Hockey Coach, attended with other athletic coaches and staff “to raise awareness with me and my men to be advocates on campus.”