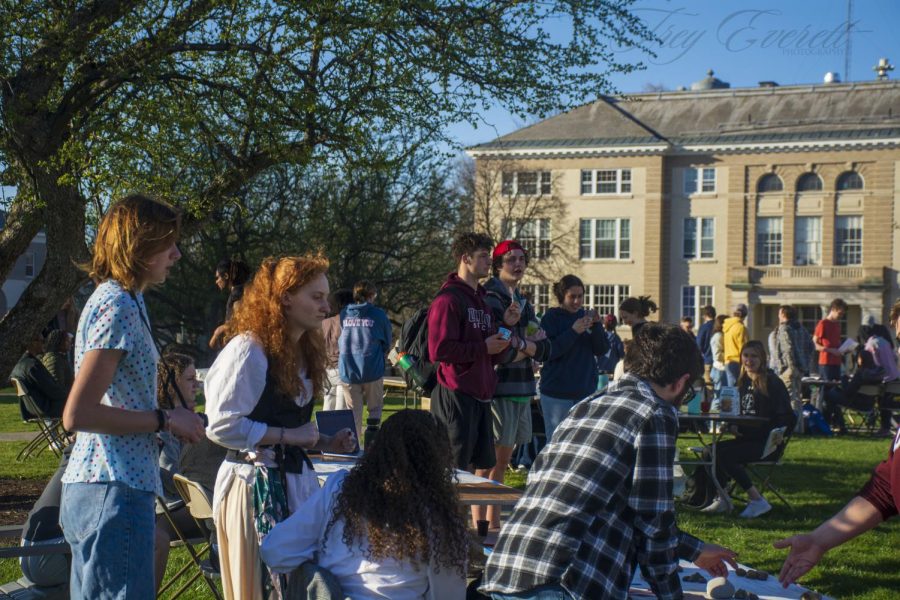 Union College students, clubs, and organizations gathered to show support toward Earth Day. Club leaders set up tables in front of the Nott Memorial to discuss the significance and meaning of Earth Day to various communities in the world. Schenectady local farm market vendors also joined to emphasize the value of buying local.

On the Friday afternoon of April 22, Union College came together to celebrate a sunny and warm Earth Day. This event was organized by U-Sustain, an environmental group run by Union students, and funded by the Environmental Action Club. Held in Schaffer Library’s plaza, a variety of different tables were set up to shine a light on the large range of Union’s environmental clubs and initiatives.

One walking through the event would hear chatter of attendees as well as classic rock playing in the background. Organizations present varied from student-run organizations like Octopus’s Garden—a student-run garden that produces a variety of vegetables and incorporates them into Ozone Café dishes, to Ozone House, the most environmentally friendly dwelling that Union College has to offer and a prime producer of locally sourced maple syrup, to A More Equitable Union, an organization to challenge disproportionate environmental impacts on different genders.

Some of the newer clubs present included Beekeeping Club, whose beehives on campus that not only create honey and help to pollinate local flora around campus. Other tables focused on STEM initiatives dealing with different aspects of environmentalism, including the table for Engineers for a Sustainable Future, a collective of engineers who work together to help the Union community to improve its green initiatives. Currently, there are discussions of the club working on improvements to the campus greenhouse.

A thesis project was presented by the Union College Aerogel Lab on “Aerogel Material”, which when applied to a catalytic converter, or a chamber that is attached to the exhaust of cars, captures and converts harmful gasses instead of releasing them into the atmosphere. This can increase efficiency by reducing the number of gasses released.

Tables run by the Schenectady trading company and The Furies Extra Virgin Olive Oil also brought together a variety of vendors from the Schenectady community and featured a variety of organic and locally sourced packaged foods as well as environmentally conscious consumer products.

There were also options available for attendees looking to eat. A food truck provided tacos, including a pineapple-themed vegetarian taco. A Ben and Jerry’s cart also served a wide variety of flavors, including vegan Cookies and Creme.

U-Sustain Co-President and Vice President of Sustainability for Student Forum Bethany Costello ’22 highlights that “sustainability and environmentalism are intersectional issues. In order to tackle the climate crisis effectively, you need to include everyone.” Costello believes that the completion of a new Climate Action Plan to achieve carbon neutrality by 2050 or earlier is something Union College can do right now.

U-Sustain meets every Wednesday at common hour in Lippman 101.