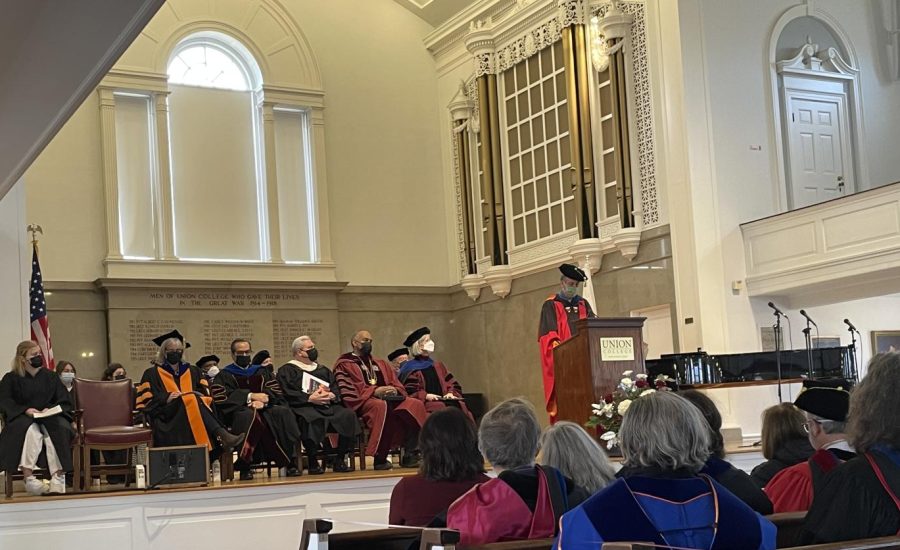 Union College celebrated Founder’s Day, celebrating the 227th anniversary of the chartering of the college on February 24. Speakers for this year’s event included several faculty members including Robert Bertagna ’85, the Chair of the Board of Trustees and Stephen Schmidt, the Chair of the Faculty Executive Committee among others. Also speaking was William Patrick, writer of the book “Metrofix,” which cover the history of Schenectady during its transition away from being a company town.In addition to speakers, Union College honored Mr. Pablo Garcia with the Gideon Hawkley award, an award given to secondary school educators who have a significant positive influence on Union students. The event was attended by approximately 150 people at Memorial Chapel. Roughly 30 more people tuned into the event through Union College’s Facebook page.

The Founder’s Day event in Memorial Chapel was emceed by Professor Kathleen LoGiudice in her role as the Marshal of Union College, a role that she has held since 2019. Founder’s Day being a celebration of Union’s history, there were many callbacks to Union’s founding and the survival of traditions. LoGuidice’s speech was no different, assuring listeners that “The values of education are alive and well.”

This is Union College’s first in person Founder’s day since the COVID-19 pandemic began, with last year’s event held virtually. And as President Daivd Harris stated in his opening remarks,“[COVID-19] was one of the greatest existential threats to American residential higher education that we’ve ever seen.” But, Harris’ speech was overall optimistic, as he further stated, “Unless a dangerous new variant arises, it’s clear that … before long, these masks will become optional and asymptomatic testing will end.” While this does not set a defined date for the end of these policies, it does offer a light at the end of the tunnel.

Following Harris’ speech, Professor Stephen Schmidt and Hayley Balogh ’22, the President of Student Forum gave their opening remarks. Both speeches touched upon the later parts of the ceremony. The latter speech also touched upon Balogh’s view of Union College as a closely-knit community with a bright future. Following their speeches, a musical interlude of three students, with singers Chloe Metcalfe ‘23, Helen Smith ‘23, Paige Kent ‘23, and pianist and arranger Professor Tim Olsen.

Interim Dean of the Faculty Michele Angrist then presented the Gideon Hawley award to Mr. Pablo Garcia. The Gideon Hawley award, named for Union College alumni and the first New York state superintendent of public education, is an award for a secondary education teacher who has a significant positive influence on Union students. Garcia is from Queens, N.Y. and teaches at the Schechter School of Long Island in Nassau County. Garcia was nominated for the award by Mayah Teplitskiy ‘25. Garcia is credited with changing Teplitskiy’s mind on mathematics from antipathy to enjoyment; Teplitskiy is currently majoring in both Mathematics and English.

This year’s Founder’s Day speaker was William Patrick, author of “Metrofix: The Competitive Comeback of a Company Town” which is a history of Schenectady during and after the exodus of General Electric and the American Locomotive Company. In his speech, Patrick spoke of the mutualistic relationship between town and gown, highlighting the era of the early 1990s, where Schenectady’s problems with crime began to affect Union’s acceptance rates. But the relationship was not simply mutually negative. In great detail, Patrick covered the role of former Union President Roger Hull in attempting to bring Union students into civic engagement with the wider community. This goal inspired a series of programs including COCOA House and Habitat for Humanity in Schenectady, both at the initiative of students. That, combined with official and moneyed support contributed to the growth of Union College to CPH while spurring investment at the Mohawk Harbor development. Both the city and the college benefited from these acts. As President Harris stated in his introduction of Patrick, ““The city and the college are inextricably linked.” It can only be hoped that Union College looks out for opportunities to help the wider Schenectady community. If President Harris is right, then it can only serve to boost Union’s own fortunes. The tone of the ceremony was intensely optimistic and a sign of confidence that Union College can invite large groups of people together to celebrate the college, the city, and their achievements.