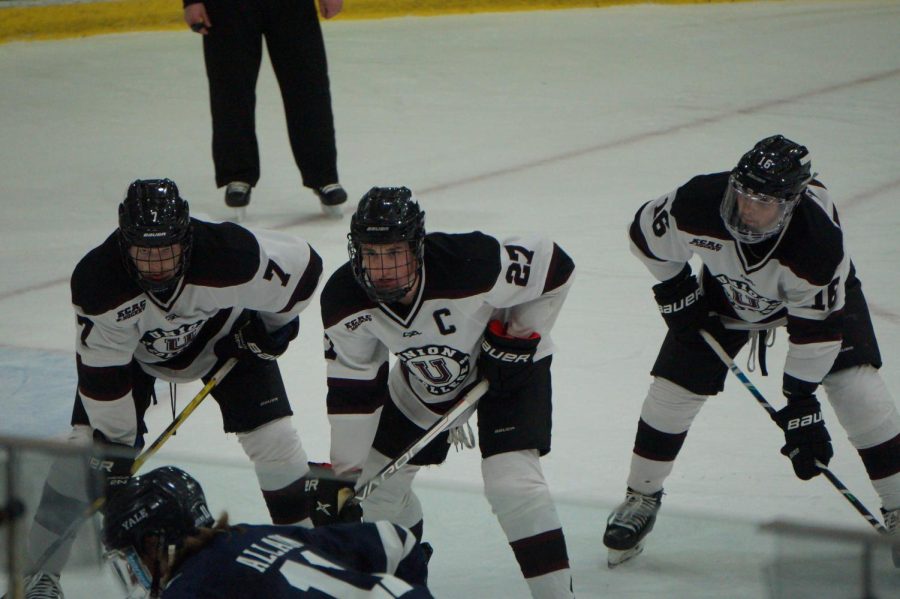 Union's men's hockey facing off against Yale on Saturday, January 22.

After 17 years of working at Union College for the men’s hockey team, Rick Bennett has resigned from his position as the head coach of the team as of Friday, January 28.

At a press conference on Friday, January 28, Jim McLaughlin ’93, Union College’s Athletics Director, explained that “Bennett has been synonymous with Union hockey over the past 17 years and has built a program of which we all can be proud… This resolution is the best path forward for both Coach Bennett and our men’s hockey program. Our number one priority is to fully support our student-athletes.” He also explained that the search for a new coach hasn’t started yet, and currently John Ronan has been named interim head coach for the remainder of the season. McLaughlin did mention that the anonymous email that had started the investigation did hold some amount of true information, but didn’t go into further detail than that.

In an interview with ABC News10, Bennett explained that his style of coaching is “tough but fair,” and that he feels that he is “at peace” regarding his resignation. Bennett was the head men’s hockey coach since the 2012-2013 season, and under him the Dutchmen had a record of 186–122–42. He had “a year and a half left on his contract,” according to McLaughlin.

“I’ve been fortunate enough to work with Rick for seven and a half years,” said Interim Coach Ronan in an interview with the Concordiensis. “Not coming to work every day to work with Rick has certainly been an adjustment, but he’s a great mentor and he’s prepared me and mentored me as a coach. I’m ready to step in and keep the positive momentum going.”

Under Ronan’s coaching, the men’s hockey team has now won three out of the five games they have played since Bennett’s absence, with one of the notable wins being against RPI for the Mayor’s Cup. Ronan explained that the team has been “absolutely fantastic” even with a total 16 players who had never played college hockey going into the season. “I am grateful for them and I hope they keep it up.”

Among the players, Ronan explained that the reaction to Bennett’s resignation was a bit of a surprise; “the process of getting involved with college hockey is a lot longer… there are guys in our current roster who we have been involved with for five, six, or even seven years. To have Rick–who has been a staple of the program for 17 years–gone, it’s a little tough and surprising.”

The Concordiensis also reached out to Josh Kosack ’22, the captain of the men’s hockey team, with no current response.

The Concordiensis published an article regarding the initial information about the allegation here.