Activist group “All of Us” returns to Schenectady City Hall 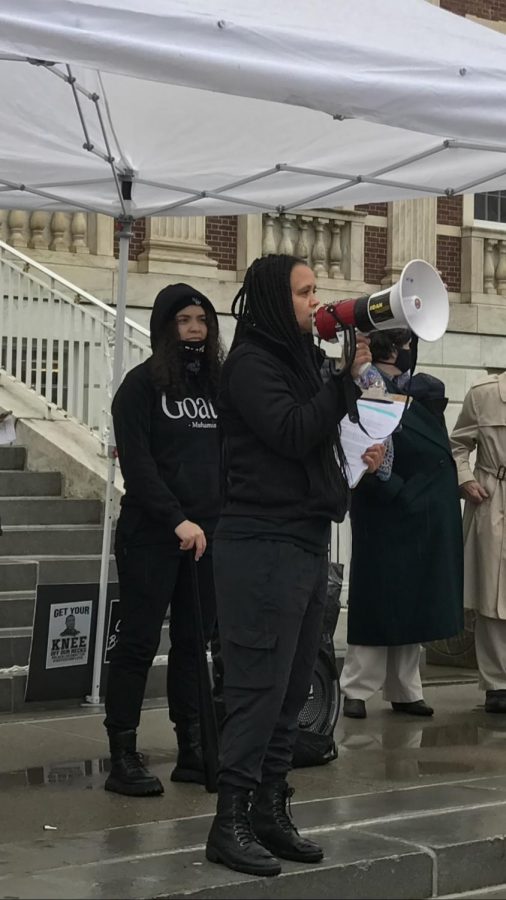 On Thursday April 1, the Capital District activist group, All of Us, held a “Get Your Knee Off Me” rally at the footsteps of Schenectady City Hall to demand the reinstatement of a ban on the practice of knee-to-neck holds for police officers. In July of 2020—less than two months after the death of George Floyd—Schenectady Police Officer Brian Pommer forced his knee onto a suspect’s neck while conducting an arrest. SPD announced a ban on the method after footage of the incident became public, but the ban was not included in proposed police reforms submitted to the Governor’s Office. In January, a Freedom of Information Act release revealed that Officer Pommer has a record of reprimands, suspensions, and letters of counsel for unprofessional behavior or dereliction of duty during escalated situations, according to The Daily Gazette.

The event began shortly after 4:00PM despite the snow and rain downpour. Sign-bearing supporters lined the sidewalks on both sides of Jay Street as organizers began the event. The opening speaker was Jamaica Miles—co-founder of All of Us—who addressed the organization’s contentious history with the SPD and the City Council. She praised the work of supporters over the course of the movement’s history, calling the collective action “scarier than anything else.” Miles was joined by Reverend Nicole Harris of the African Methodist Episcopal Zion Church and President of Chapter 2175 of the NAACP in Schenectady, and Reverend Dustin Wright of the Schenectady Clergy Against Hate. Harris called on the SPD to “do your job effectively without harming people unnecessarily. Do your job effectively without knee holds.” Wright spoke next, comparing the deaths of George Floyd and Ahmaud Abrey to the Crucifixion.

The activist mood was tempered by city council candidate Damonni Farley, who warned against self-satisfaction with mere presence at marches and events, and called on people to be more activated in their day-to-day interactions with people. Shawn Young—another co-founder of All of Us—addressed the crowd about the level of community activation that they had achieved since the organization began in 2020. “We created the culture of engagement”.

All of Us leader Mikayla Foster finished the rally by leading a march up Liberty Street from City Hall to the front door of SPD Headquarters.