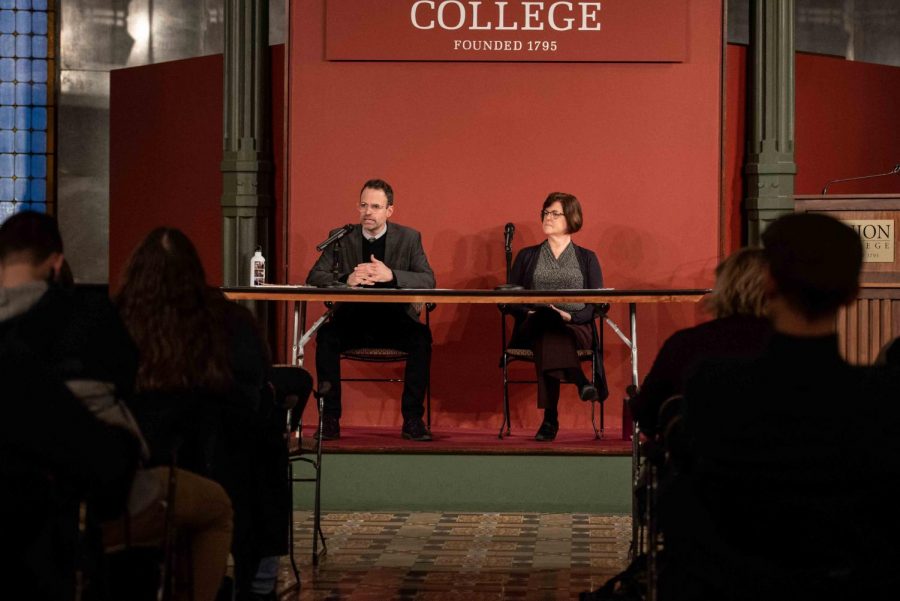 A discussion regarding the current impeachment proceedings was held on Wednesday January 22 in the Nott Memorial. The event, the brainchild of the newly-formed Civic Engagement Initiative, headed by co-chairs Lauren Dougherty and Robyn Reed, was conducted in a forum-style to foster a discussion, not only of the facts of the proceedings, but also of the opinions and ideas of the campus community. The two speakers, Political Science Department Head, Professor Bradley Hays, and Professor Zoe Oxley, were introduced by Ruchi Ravel ’20.

Professor Hays began the talk by speaking about the history of impeachment in the United States, mentioning that it is a fairly uncommon affair that had few procedures prescribed to it. However, there was an understanding that Presidential power provided a unique danger to the government, with it being easy to devolve into corruption. The question currently being discussed in the Senate is whether President Trump violated established law, and therefore whether he should be removed from office, with the House of Representatives having formally impeached Trump in December 2019.

Professor Oxley spoke about the viewpoints of the public that have been expressed through opinion polls. She positioned that the belief of whether Trump should be convicted or not is explicitly split down party lines, with Democratic voters believing in conviction, while Republicans favor acquittal. Moreover, Oxley elaborated on the psychology of people, who are more likely to be receptive to viewpoints that align with their own, and block off opinions that are to the contrary.

One of the aforementioned co-chairs of the Civic Engagement Initiative, Lauren Dougherty, explained that it was important for the Union campus community to take a firm interest in the current impeachment proceedings because this is “only the third Presidential impeachment trial in US history.” Dougherty carried on, explaining that the Civic Engagement Initiative believed that it was vital for the campus to be provided with “context” surrounding President Trump’s Impeachment Proceedings.

Dougherty explained that the Civic Engagement Initiative will be discussing and deciding on the future events that will be held.