Highlights from the 2020 Vice Presidential debate 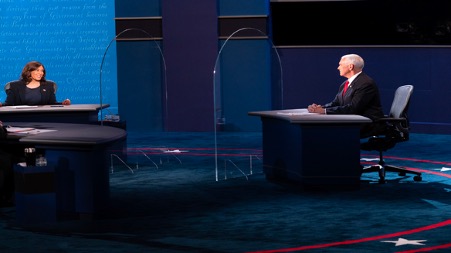 On October 7, 2020 the Vice President debate was held at the University of Utah between current Vice President Mike Pence and Senator Kamala Harris. This debate was more civil and respectful than the Presidential Debate that took place on September 29, 2020.

Despite the comedic presence of the fly resting on Pence’s head, there were some not-so-funny and majorly disheartening moments in the debate. One of those moments that stuck out the most to me was when Harris said, “Mr. Vice President, I am speaking.” This statement is something that far too many women relate to. Pence continued time and time again to interrupt Harris during her allotted two minutes of what was supposed to be uninterrupted time. It was too hard for Pence to follow the rules and respect the agreement that he had made before the debate had even begun about not interrupting when the other is talking. This statement highlights the gender based suppression that is often seen in politics. When Harris was advocating for her own voice, she was also speaking up for every other woman that has ever been in a male-dominated field who has had a man interrupt or talk over her. Pence interrupting Harris during her allotted time shows that he was trying to create a power hold over her during the debate, as possibly an intimidation tactic to throw off Harris. However, Senator Kamala Harris is a highly intelligent, respectable and an empowered woman who knows exactly how to deal with the kind of man that Vice President Pence is. Despite all his attempts, she was not caught off guard by this and handled the gross nature of his interruption with class.

However, something that both candidates neglected to answer was the moderator Susan Page’s question surrounding the age of President Donald Trump and former Vice President Joe Biden. This was an integral question to be asked because both Presidents are in their mid-to-late 70s raising concerns about their fitness to be able to fulfill the duties and responsibilities of being the President of the United States. Most election years, voters do not base their decision between the two candidates for President off of who is running for Vice President. But this year, I feel like a lot of people will be voting based on who they want for Vice President.