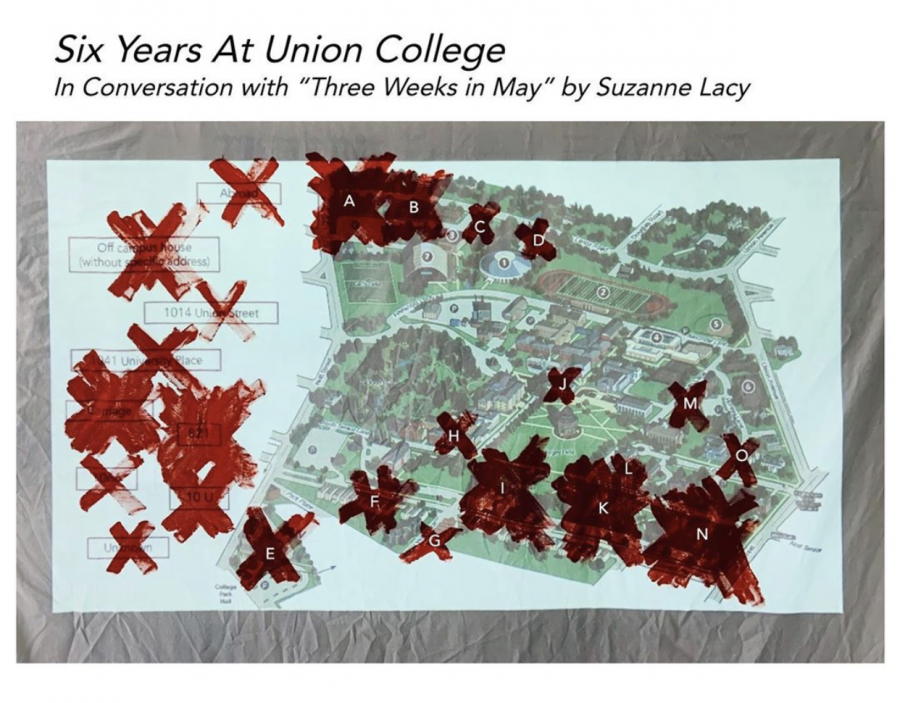 On September 7th, 2020, Tina Tully ‘21 made two posts to her Instagram page @artbytinatully; one was a video and the other a few slides related to the content in the video. Tina’s post centered around an art piece she created titled “Six Years at Union College.”

Tina Tully ‘21 is a senior at Union College majoring in both Mathematics and Studio Arts. She was born in New York City and raised in New York and London. She has exhibited at the Wikoff Student Gallery on Union’s campus and has been working on themes involving women’s empowerment. From September 7th, 2019, to February 7th, 2020, Tully along with Lilith Haig ‘21 hosted an exhibition titled “The Weight of This.”

“Six Years at Union College” depicts the campus map of Union with over 90 red x’s painted on it. Each red x represents a sexual assault that occurred where the x was painted. Tully says that her inspiration and anger for this work came from another art piece known as “Three Weeks in May,” created by Suzanne Lacy. “I first learnt about this project and artist this past winter term, in the art history class “Visual Culture, Race and Gender”, which is taught by Lorraine Cox. In her piece, Lacy marked the police reported rapes that were occurring in Los Angeles over the span of three weeks on a map,” Tully explains.

It is important to note that Tully collected the responses for her piece using a social media survey, so it is likely that there are more sexual assaults that weren’t reported for the piece due to the nature of social media and algorithms. The reports collected for this piece all fell between 2014 and 2020. Even with the assumption that only 94 sexual assaults occurred over the six year period, that still indicates about 15 sexual assaults each year on average.

These numbers are starkly different from those presented in the Clery reports for years 2014-2019 documenting the crime reports from 2013-2018. According to the Title IX Coordinator Mary Simeoli, the annual Clery report documents all crimes reported by students in spaces owned or operated by the college for educational purposes. Amongst the crimes reported on these documents, the Title IX related crimes are considered to be rape, statutory rape, fondling, stalking, dating violence, and domestic violence. According to the Clery reports, only 46 cases of rape, fondling, statuatory rape, dating violence and domestic violence have been reported in the past five years.

The Clery report only documents the crimes reported the given year regardless of the date of occurrence of the incident which means that the report doesn’t accurately represent the number of such cases that might have actually taken place that given year. This in turn insinuates that a lot of instances of sexual assault go unreported at Union.

In addition, only 1 case of sexual assault off-campus was reported over the five year period, which again contradicts the amount of red X’s on Tully’s piece reflecting the off-campus assaults. Another important visual to note is that the X’s on Tully’s piece are centered around mostly freshmen and Greek housing, with West College, Davidson, Fox, Raymond, and Potter all having the highest concentration.

“Union is a very small school and all the victims who were brave enough to report either their rape(s), sexual assault(s), and/or unwanted sexual advance(s) didn’t have their identity protected by the school during their investigations.”

“When I filled out a lengthy report form as soon as we finally got a sexual assault coordinator this year, she did not respond, instead an assistant working in the title ix office responded asking me if I would like to submit a report. This was extremely frustrating as the process had been very triggering to relive and it seemed I had not even been heard, and I had waited so long to report as I was close friends to a student who had terrible experiences with Melissa Kelley. I am not the only survivor of sexual assault at Union who believes that the administration used Melissa Kelley as a scapegoat while refusing to make any actual change. After I was raped I was worried reporting would get me kicked out and /or ostracized as I knew very little students as I was a freshman. I also didn’t know what a rape kit was, so I didn’t do one that could have helped me seek justice. I think more education needs to go out about potential processes students can seek after being assaulted.”

“I didn’t believe that Union would have helped me and it made me feel even more helpless.”

***THESE ACCOUNTS WERE SHARED BY TULLY FROM HER SURVEY. CONCORDIENSIS DOES NOT TAKE RESPONSIBILITY FOR THE VERACITY OF THESE CLAIMS.***

Tully hopes the culture at Union changes for good. “My heart and love goes out to everyone that submitted self-reports to my survey and everyone who has been sexually assaulted at Union. We need to continue to support victims of sexual assault and continue to amplify their voices. They deserve and need to be heard. We need to stand with them. Always.” Tully also credits Cameron Dreher ‘21, Maddy Schwartz ‘21, Maya Stevenson ‘21, Jane Cataldo ‘21, Bella Dworkin ‘22 and Sarah Vanasse ‘21 for helping create the art piece. She also thanks Chrissy Foo ‘20, who graduated from Northwestern University.