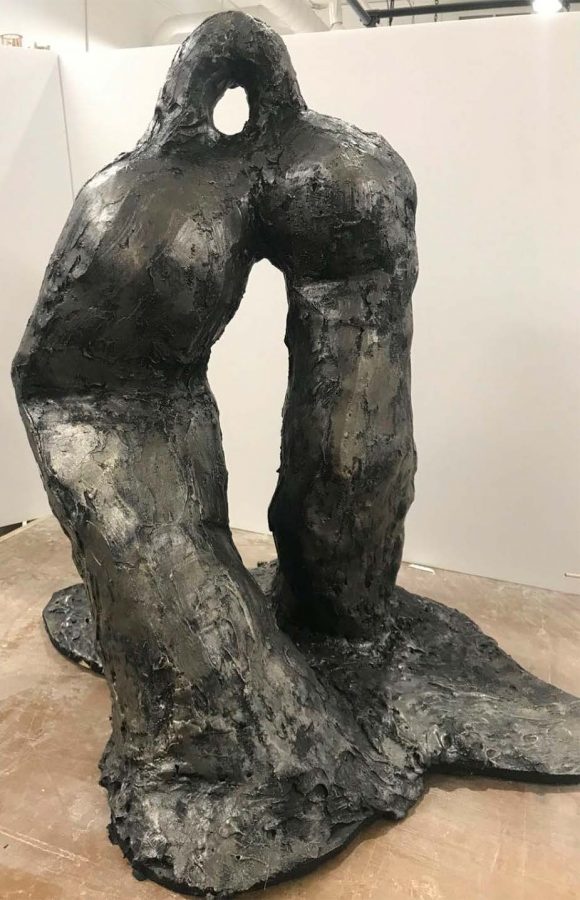 This September, students Lilith Haig ’21 and Tina Tully ’21 present their joint composition “The Weight of This” in the Wikoff Student Gallery. It consists of multiple sculptures, booklets and a large mural plastered on one of the dividing walls of the Nott Memorial’s second floor. According to their preamble, the project as a whole is a statement counteracting not only the patriarchal society in which most women in modern society grow up, but the masculine space of Union College itself, having been a historically all-male college. It also draws on certain events of spring 2019, which have been covered by the Concordiensis, including the lawsuit filed following Union College’s inaction towards a first year student’s sexual assault report. (More information can be found on the Concordiensis website, concordiensis.com.)

Part of the display includes a statement from Haig and Tully regarding this relevance: “In light of recent events regarding sexual assault at Union College, we think that this is a pertinent time to show this artwork and hold a dialogue about the treatment of women on our campus and sexual assault. We want to create a safe space that our fellow students at Union can find empowering.”

The first portion of the exhibit is comprised of six sculptures by Tully, each with the title “Women” plus a Roman numeral ranging from one to six. The wood and plaster figures all stand two to three feet tall and take on various colorings, from warm blended hues to stark monochromatic contrasts.

While most hold a similar shape, the fifth edition remains more abstract than the others, lacking the circular shape at the crown and the two rigid vertical columns present on its counterparts. Tully describes them as abstract versions of the female figure, which, though lacking reproductive organs and features commonly shown as the main viewpoint of femininity, remained identifiable as ‘womanly’ in our understanding. The conjectured forms remain open to interpretation of any specific symbolism, but are definitively independent of the male gaze and subsequent alteration.

The second section of the exhibit is Haig’s work, titled “A Drop of Blood.” Under protective glass lie opened booklets containing poems and simple drawings on the subject of sexual assault. The poems are meant to represent the (implied male) offender’s perspective, using genuine quotes from assault perpetrators on campus, like “THUD if your head hits THUD the wall hard [enough] THUD maybe you will forget” and “I was too fucked up last night so whatever happened was not me.”

The corresponding images represent the (implied female) victim’s perspective, drawn to evoke surges of wordless feelings to match the voicelessness sexual assault victims often feel during and after their experience. These drawings include many depictions of blood, as well as mangled body parts, car crashes and other violent scenes. Both sides used artforms originating in Japanese culture, including haikus and mokuhanga, or printmaking.

The large artwork on the supporting wall of the Nott Memorial titled “How Far” contains the words and imagery of “A Drop of Blood” pasted over a mural of cut-out magazine ads of varying size. The ads illustrate women cooking, posing naked and other scenarios of objectification and subjugation. Though the outfits and hairstyles denote an older time period, the images are chosen for their current relevance.

The entire work is considered interactive, as viewers are encouraged to take the individual pieces of art with them, thereby “stripping” the women behind the crude sayings that cover their bodies. This also lays the groundwork for further interpretation; though the experiences represented by the square prints are horrid in nature, they are the only thing between strangers’ curious eyes and hands. When removed, they leave the women beneath vulnerable. The process invites a discussion of the implications of feminism and autonomy within the context of vulnerability, with the hope that the women will finally be freed of the negative connotations behind the assaults and will feel safe in their own skin once more. However, it is ultimately up to the attendee to understand the work in their own way.

“The Weight of This” will continue to be available for viewing in the Wikoff Student Gallery on the second floor of the Nott Memorial until February 7, 2020. There will be a panel discussion on October 24 from 5 p.m. to 6:30 p.m.