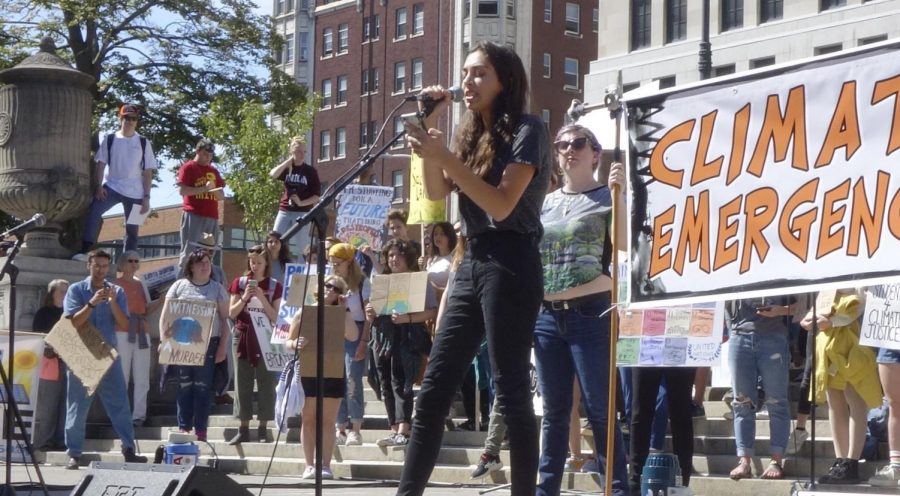 Students and supporters rallying in the Capital Region. Photo by Michael Rosenbaum.

On Friday September 20, 23 Union students joined people from around the world in protesting government response to climate change. The strike has been partly inspired by the work of Swedish teenager Greta Thunberg, who had previously taken time off of school in order to protest at the Swedish Parliament.

Student groups UCAN and U-Sustain chartered a bus to transport those who signed up. Students joined the scheduled rally at around 1 p.m. and spoke of how they believed government should be combatting the causes and the effects of climate change.

The ‘Global Climate Strike’ was held days before the United Nations was scheduled to hold a Climate Action Summit, bringing countries from around the world together to discuss what actions they are going to take to reduce the effects of climate change. This is following on from the Paris Climate Agreement, made in 2015, of which the United States is no longer a part of.

The current Trump administration has taken a much more skeptical line on climate change compared to the previous administration led by President Obama. Beginning with the leaving of the aforementioned Paris Climate Agreement, calling on the Environmental Protection Agency to get rid of the Clean Power Plan or the promotion of drilling in public lands, Trump is taking a much more relaxed approach to climate change prevention than his direct predecessor. In a time where more and more countries are beginning to discuss climate effects with much more seriousness and vigor, the United States is going against the grain. This is one of the reasons that American students are protesting in much larger numbers than previous years.

Co-Presidents of UCAN Joshua Kloud ’21 spoke to the Concordiensis about why it is vital for students and young people to play an active role in protests such as these, explaining that this is the “most important issue facing this planet.” He went on to say regarding climate change that it is “an existential threat,” that is going to need the combined support of all generations.”

Although Union put out no official position on the right of students to miss their classes for the protest on Friday, some faculty asked staff to give students the opportunity to attend the march, on the condition that work would be made up. Biology Professor Jeffrey D. Corbin in the Department of Biological Sciences sent out an email asking staff to be “understanding” of a student who wants to participate, as well as inviting staff to themselves join the Union group at the march.

“Why should students around the world go to class when there is no future?” Kloud asked.