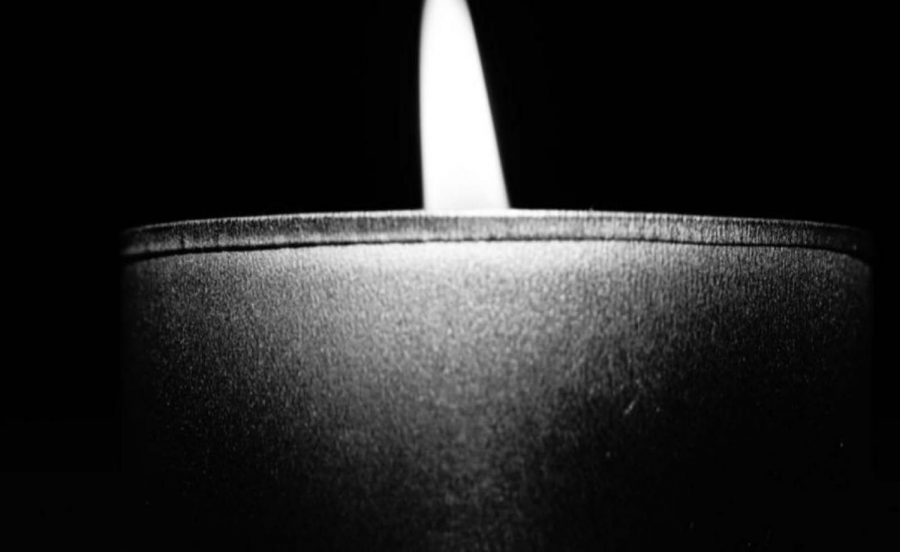 A candle lit in memory of those who perished in the Holocaust. Image courtesy of Hillel.

On Thursday, May 2 the campus was visited by Holocaust survivor Ivan Vamos. This talk took place on Holocaust Remembrance day and was sponsored by Hillel. Union College has a tradition of inviting Holocaust survivors to share their stories in the spring.

Vamos said that he had only relatively recently begun speaking about his experiences during the Holocaust with much of it having started after grandchildren began asking questions.

Before this time he had given little regard to his life as a small child, but had wanted to take over the reigns of other survivors who were no longer able to spread the word. He espoused an anecdote about his birth, that the doctor who had delivered him was crying, not due to a health issue with his mother or him, but due to the Germans marching into Austria. The doctor exclaimed, “How can a child be brought into this world?”

Vamos also spoke about how during this time his uncle was given a visa to the US, an extremely uncommon occurrence at the time.

As the Germans began moving towards Hungary, the livelihoods of those of Jewish origin were in much danger with the revocation of work licenses and conscription for many Hungarians.

Vamos’ father was conscripted into the Hungarian army, with the soldiers being described as “work servants” having little to no chance of returning home to their families. Also during this time Hungary became much more averse to immigration, with many non-Hungarians being deported.

Vamos explained that at the time he had not noticed that him and his family were treated differently, as he was a small child at the time. Although he recalled that some children would not play with him and he was not allowed in certain public places.

Much like his father, his grandfather was also called into service by the military. Before Hungary was ruled by the Arrow Cross, a Hungarian right-wing regime that allied with the Nazis, Vamos’ grandfather had been high ranking in the military. During this period he was routinely treated badly by soldiers, even those with lower ranks than him. After his conscription, Vamos’ grandfather arrived back at home unconscious but still alive.

His grandfather arrived back at home unconscious but still alive, and couldn’t believe that he had been treated so badly. Similarly, his father was sent away with his entire unit and never returned again. The official word said that there had been a “big accident”, although it was explained that this was actually murder, with many groups ordered to march through minefields, were shot and had their belongings stolen.

Vamos and his mother traveled with fake papers to the countryside to try and escape the harshest repercussions of the war. They converted to Catholicism and rented a room from an old lady in a small village. Vamos’ mother was eager to escape the “front” and stay away from the Russians.

In early 1944 however, rural police began visiting with automatic weapons, looking for those that they considered “undesirable.” With air raids becoming more frequent and the requirement to take cover in small shelters, Vamos and his mother were questioned often to see if their story could be found to be false. When Vamos contracted the measles, his mother exclaimed that she was glad as they were unable to go into the shelter when an air raid occurred.

Vamos went on to explain that he and his mother traveled back to Budapest, as the cities were seen as safer, with “protected buildings” such as those used by the Swedish Embassy, which was sheltering Jews and providing fake papers during the war.

Vamos and his mother moved into one of these buildings, however they were forced out one day by the right wing regime with attack dogs and weapons. Vamos and his mother were separated into different groups, but his mother grabbed him and ran towards the crowd of watching Hungarians. They were able to escape the soldiers and blend in.

For a little while they were able to survive in burnt out buildings, with the end of the war nearing and many soldiers retreating. Vamos described his experience as a child like “being in a video game,” with him able to look outside at the air raids and searchlights and dog fights. Soon the streets were filling with Russian tanks and soldiers, the skies with Russian fighters.

Vamos and his mother were spoken to by a Russian soldier who gave him a piece of bread to eat. After the war, Vamos traveled to the US as a young dependent, after earning his keep on a farm back in Europe. At the time of the war, his mother had explained very little to him but had made sure his best interests were her priority. He had not realized the sort of people that had been looking for him. Vamos only returned to Hungary in the 1990s. He stayed away to avoid being forcibly conscripted into the Hungarian Communist military. One there, Vamos found Hungary to be more unpleasant than he thought he would.