Baseball loses both games in double header in Rochester 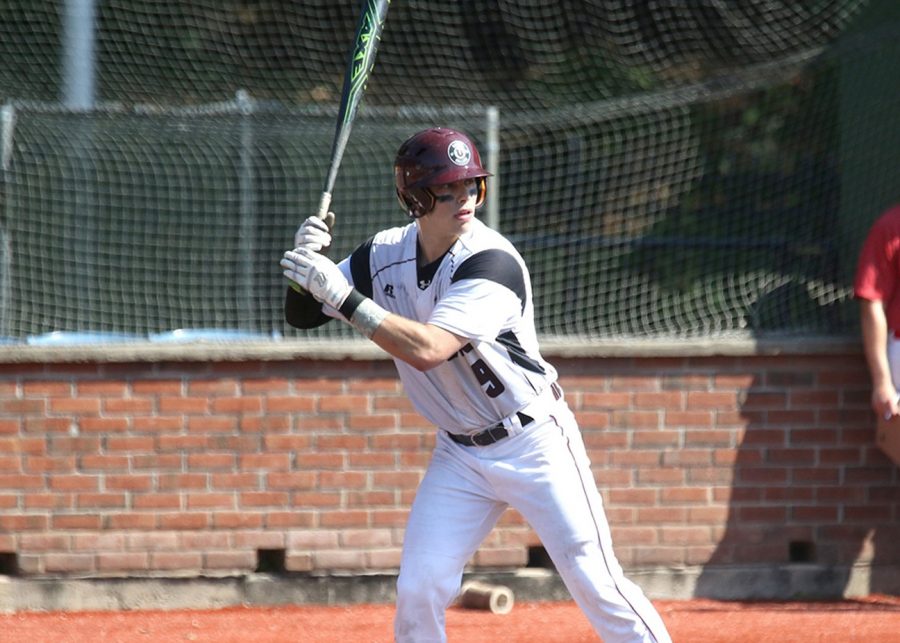 Catcher Justin Cabanas gearing up at the plate for the Dutchmen. Photo courtesy of Ross Ladue.

This past Sunday the Dutchmen competed in an exciting double header against Liberty League Conference rival University of Rocheste r.

The first game saw fast action, as both teams got off to an impressive offensive start. Rochester took an early lead with an rbi single in the bottom of the first.

Union responded quickly with designated hitter Kevin Chaimowitz ’21 smashing a two-run homerun and giving Union a 2-1 lead in the top of the second inning.

Teammate Center Fielder Joe Ganin ’19 added to the lead by belting a two-run double. The lead was short lived however and Rochester piled up four runs in the bottom of the second making it a 5-4 ball game in Rochester’s favor.

In the bottom of the third Rochester tacked on another run making it 6-2 going into the fourth inning. The fourth inning proved fairly uneventful as both teams failed to score runs.

In the top of the fifth First Baseman Sean Cullen ’20 hit a two run homer and made the game tied at six a piece. Rochester responded quickly once again and scored five additional runs in the bottom of the fifth inning.

The score was Union six, Rochester 11, with two innings left in regulation. The last run came off the bat of Ganin who scored Second Baseman Anthony Amoroso ’19 on a fielder’s choice play at second base.

The game ended with a final score of 11-7, with Rochester’s offensive fury proving too much for Dutchmen pitching. Despite the loss there were still many noteworthy performances from the team.

Infielder Jake Rowland ’22 went two for three and scored a run. Lastly Ganin went one for four and lead the Dutchmen with three rbis.

Team states were fairly even in the hit category with both teams belting ten hits a piece. Union’s defense slipped up for an error while Rochester’s defense ended the day without an error.

The next game started in similar fashion with both teams getting off to impressive offensive starts. Union got onto the scoreboard first thanks to a rbi groundout by First Baseman Sean Cullen.

Rochester’s offense retaliated quickly and scored four runs in the bottom of the first inning.

With the score now seven to three a balk in the seventh inning swung the tide in the Dutchman’s favor and scored Anthony Amoroso.

However Rochestor responded with a one run homerun and the scored ended with the Yellow Jackets winning eight to four.

The second game proved tougher for both teams as they both struggled defensively, with Union having three and Rochester having two errors at the conclusion of the game. They tied with nine hits each but Rochester outscored the Dutchmen eight to four.